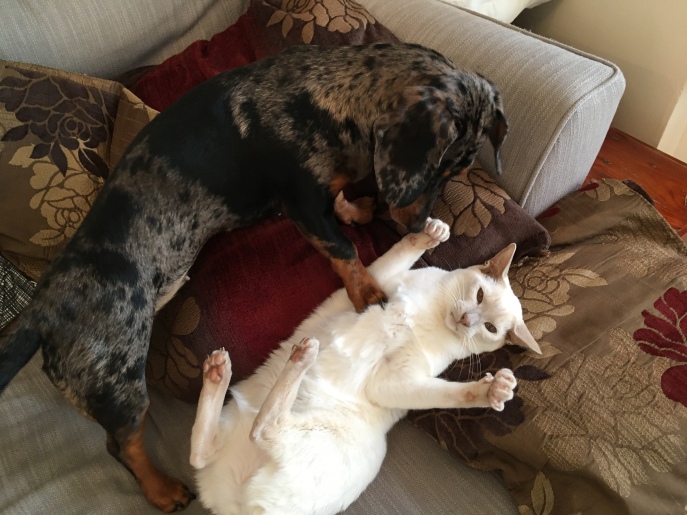 Then Hetty (right) decides to use Sia as a trampoline.

Once upon a time there were six of us (the magic number). Milly (moi) in the foreground, with my Siamese friends Josie (left), her brother Herbie (the Lilac point behind me), my brother Dave (the sleeping Chocolate point), Noah the Chocolate Burmese (and greatest cat ever), plus Ruby (red Burmese in the radiator bed). Sadly, all five of my old friends pictured above have passed away.

I still miss them and i wish my brother was still here, but i have a lot of new friends now and life is just as good.

Here’s hoping you all have a Merry Christmas with lots of toys and treats!

Ruby’s condition had slowly deteriorated over the last year and when winter came I remember thinking that it would probably be her last. She was quite wobbly on her legs but still able to get where she wanted to go and amazingly was still bounding up the stairs and managing to jump on the bed, although once settled she barely moved from that position for the whole day (just like any other cat I hear you say). My wife & I both agreed to keep a close eye on her progress and made the usual pact that if one of us spotted any warning signs and decided ‘enough was enough’ that we would both agree to do the right thing and not leave it too long.

By the time we reached February, she had become very unstable on her legs and was hardly eating. Just sleeping all day. We were allowing her to sleep on the bed with us at night as a little treat, but she had become extremely withdrawn and was obviously in some discomfort due to her various ailments. We decided it was time to act.

Over the weekend we planned ahead for the ‘act’ to take place that Friday when we got home from work, and as we had done previously with our last two cats, we booked the vet to come to the house (no expense spared) and make the final journey for her that little less stressful.

I don’t know if you’ve ever been involved in a ‘scheduled euthanasia’ but it certainly adds an extra ‘dark’ dimension to the already unpleasant situation in hand. So the plan was in place, and the black cloud hung over us all day Monday, Tuesday and Wednesday. It’s so hard to look an old friend in the eye, knowing that YOU have cold-heartedly planned to end their life, without them being aware. All you can do is keep trying to reassure yourself that you are doing the right thing (for them and not you). As it happened though, things were not to end up as planned.

When I got home Wednesday night I could see her breathing was more laboured than usual and it was a struggle for her to even drink.

My wife instantly grabbed the bull by the horns. She immediately called the vet and although it was ‘out of hours’, within minutes (we literally live just round the corner from our vet), we were standing there in the surgery about to do the deed. We explained our previous euthanasia traumas we had experienced with our last two Burmese cats (both disturbing ordeals involving 3 injections both times) and so the vet suggested a sedative and cannula prior to administering the final injection. This was carried out perfectly and Ruby slipped away peacefully in our arms.

We left her there so the vets could arrange the cremation and casket, and 15 minutes later we were sitting in our lounge again with our other cats, trying to get to grips with the bizarre swiftness of what we had just done.

I am forever indebted to my wife for being able to grab the bull by the horns in these situations. I’m far more prone to procrastinate and delay what, deep down, I know must be done. She seems to be able to momentarily shelve her emotion and focus completely on the wellbeing of the animal. People, not so much 😋.

At the end of the day, our responsibility as pet owners has not been entirely fulfilled until we have completed that final 1% of care duty, namely the close monitoring of their last days and ensuring the most pain-free and humane passing from this world.

What better way can we repay them for the love and devotion they give so unconditionally ? 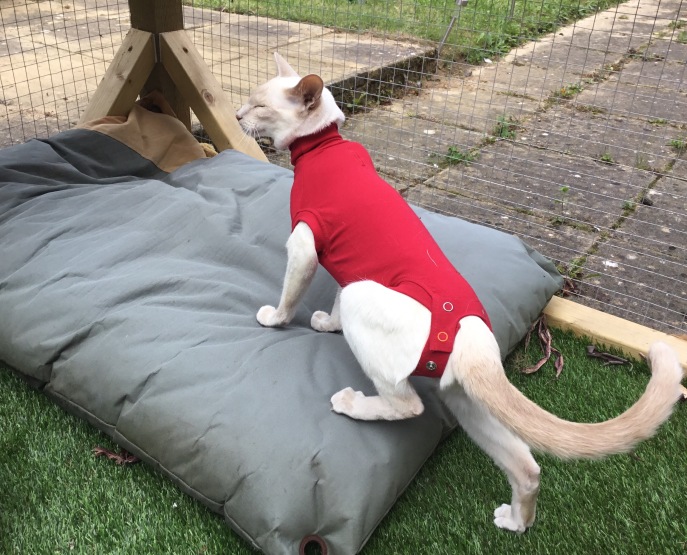 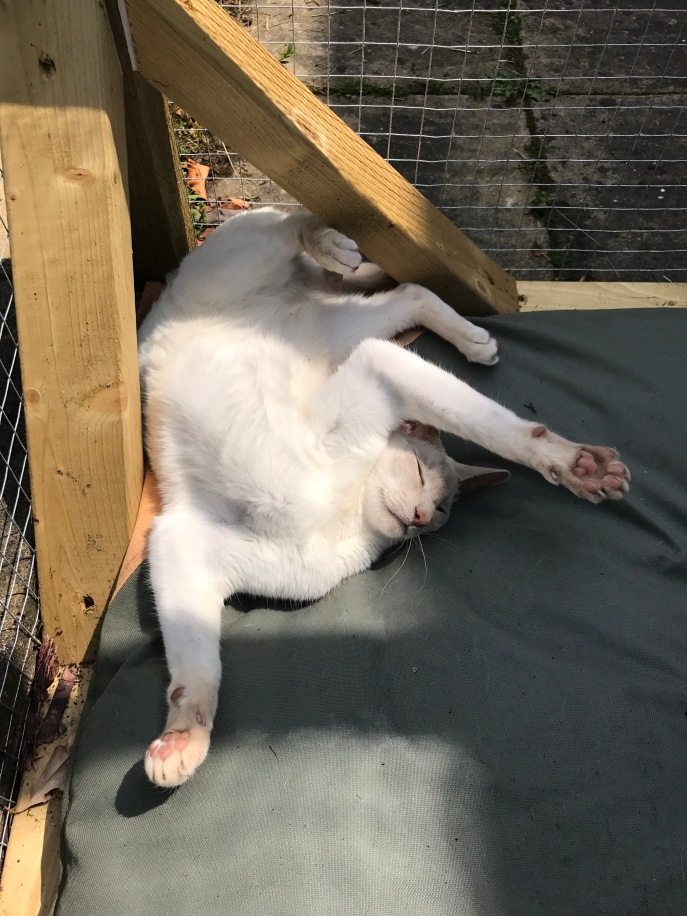 draggedinbythecat
Create a free website or blog at WordPress.com.